Animal research has been crucial in progressing biomedical science – it has vastly increased our understanding of how our bodies work, and has been a critical step in medicines development and in the development of other types of treatment.

Human volunteers are used in many types of study. But sometimes this isn’t possible or ethical, even when human biology or diseases are being investigated. For example, mice reproduce quickly and have large litters, which allows researchers to study effects on later generations. Experimental animals can be housed in controlled conditions and given controlled diets; many studies would not be possible without reducing variation in this way. Additionally, the measurements that need to be made in a study might be too invasive to consider human volunteers, or might only be possible to make post mortem.

The use of animals in research (how many can be used, and what can be done) is tightly controlled by law in the UK. The law seeks to protect the welfare of laboratory animals while allowing important medical research to progress. Animals may only be used for research at licensed institutions, in specific licensed projects and by licensed individuals. There must also be a review by an ethics committee before any project using animals can begin.

More information about the use of animals in research, its regulation and the development of alternatives to animal research, can be found on the websites of Understanding Animal Research and the National Centre for the Replacement, Refinement and Reduction of Animals in Research.

The early stages of research into potential new medicines, or ‘candidate compounds,’ involve computer modelling and laboratory studies, for example using artificially cultured cells. Most candidate compounds fail at this stage and never go on to testing in either animals or humans.

By law, all potential new medicines must be tested on animals before being tested in humans. The primary aim of animal studies in medicines development is to establish the safety of a new medicine (or its ‘toxicology’); only then can the decision be taken to proceed to clinical trials in human volunteers. Such animal studies are known as non-clinical safety testing.

Animal studies of new medicines also provide important information on how the medicine enters the body (absorption), how it travels around the body (distribution), how it is broken down by the body (metabolism) and how it leaves the body (excretion).

All of this information is used to decide whether the new medicine can proceed into the first human clinical trials, and if so, what dose should be used. 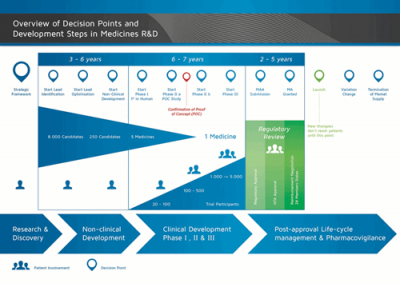 This image represents all the stages of medicines development, including non-clinical development which involves animal testing. It is provided here for free, non-commercial use under a Creative Commons CC BY-NC-SA 4.0 copyright licence. Copyright EUPATI.

PrevPreviousWhat is patient data and how is it used?
NextGenome editingNext