Clinical trials are an important part of medicines development, and the development of other types of treatment such as medical devices and vaccines. 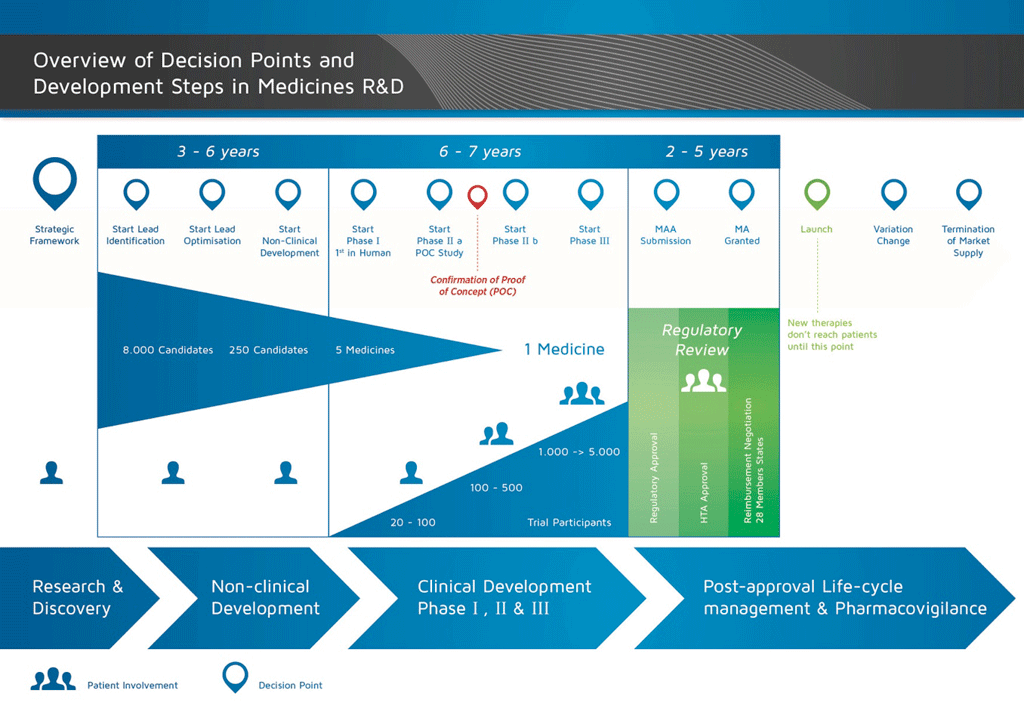 This image represents all the stages of the development of medicines and other treatments, including clinical trials (or ‘clinical development’). Copyright EUPATI.

Phase 1 clinical trials are designed to test whether a treatment is safe in humans. They also look at whether the treatment behaves in humans in the same way it behaved in earlier experiments involving animals. These studies provide information on the way that the medicine works: the ‘mechanism of action’.

Around 20 to 100 volunteers are included in phase 1 clinical trials, and they are usually healthy, male volunteers. The trials are generally carried out in special units.

Clinical trials are guided and regulated by a set of international standards known as Good Clinical Practice (GCP) to protect the safety of the subjects in the study.

Phase 1 clinical trials start with a very low and single dose of the treatment; once it has been shown that there are no safety concerns with this first dose, the study can continue with a slightly higher dose. This type of study is known as a Single Ascending Dose (SAD) study. This is usually followed by a Multiple Ascending Dose (MAD) study which involves giving multiple doses per volunteer over time.

Other studies within a phase 1 clinical trial may also be carried out; for example, studies investigating the effect of food or other medicines on the function of a new medicine.

In phase 2 (and phase 3) clinical trials, volunteers are usually split into two groups. One group has the new treatment and one group receives the current best treatment, or a dummy treatment which has no effect on the body (called a ‘placebo’). These trials are normally ‘double-blind’ and ‘randomised’.

‘Double-blind’ means that neither the doctor nor the volunteer knows who is receiving the new treatment or current best treatment or placebo.

‘Randomised’ means that the allocation of each volunteer into one of the groups is done by chance. This is usually done with a computer that generates a random code. It cannot be influenced by the doctor or anyone else.

Phase 2 clinical trials are generally too small to provide enough evidence about a new treatment’s safety and how well it works (efficacy) for it to be authorised for use. But the information they provide is important in deciding whether to proceed to phase 3 clinical trials, which are the most complicated and expensive phase of development.

Phase 3 clinical trials are the largest, most complicated, and most expensive part of the development of a treatment. They aim to confirm the safety of a new treatment, and how well it works, in a large patient population.

The decision to go on to phase 3 clinical trials is only made if supported by all the information gathered from earlier studies. The design of such studies normally requires discussion with external experts, regulatory authorities, patient groups and others. This ensures that the right questions are being asked by the clinical trial, and the right information is being collected. The trial design will also include what dose(s) to test; which patients can be recruited (inclusion criteria); which patients cannot be included (exclusion criteria); how many patients are required.

The number of patients in a phase 3 clinical trial is important so that the results can be properly interpreted and will meet the requirements of the regulatory authorities who will ultimately decide whether to authorise the treatment for use. At this stage, the trial may involve thousands of patients. However, this depends on what the treatment is intended for (the ‘indication’). Phase 3 clinical trials are also often run across several countries.

When designing clinical trials in small populations, a balance needs to be made between what is necessary and what is possible to help researchers understand the effects of new treatments. The dilemma is to recruit a sufficient number of volunteer patients when only a very limited overall number of patients with the disease exist.

The use of ‘adaptive design’ for clinical trials is becoming common for small populations. For instance, adaptive design allows researchers to look into the results during the course of the trial (rather than waiting to the end) and to stop a specific treatment being given to one group of volunteers if no positive effect is seen there. Another option with adaptive design is to combine phases 2 and 3 of the clinical trial to reduce the overall number of patients required.

The content on this page is provided for free, non-commercial use under a Creative Commons CC BY-NC-SA 4.0 copyright licence. This content is adapted from the “The A to Z of how medicines are developed“, copyright EUPATI.

PrevPreviousBiobanks and patient registries
NextWhat is patient data and how is it used?Next