The start of our Timothy Syndrome journey

It has been a bit of a crazy first year for Timothy Syndrome Alliance (TSA) – in a good way that is. Our middle son Calvin, 13, didn’t speak until his first year at school and then it was only by using Makaton. He was eventually diagnosed with developmental verbal dyspraxia (DVD) and developmental delay (language, learning and social communication difficulties). In 2016, the Deciphering Developmental Disorders (DDD) Study found a genetic change in the CACNA1C gene; Timothy syndrome, a diagnosis which was backed up by the 100,000 Genomes Project in 2019. Calvin was confirmed as having a LongQT heart rhythm so had a cardiac monitor implanted. This was all really scary especially as we hadn’t known he had anything wrong with his heart. 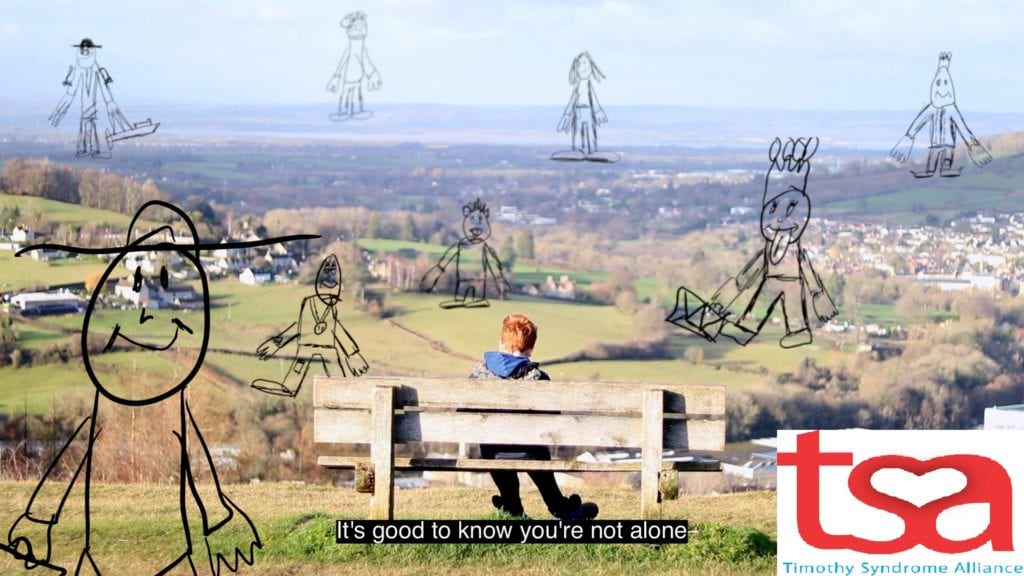 As a family we found it frustrating that medical professionals have very little information about Timothy syndrome – it is just all too rare in the world of rare.

Having turned to the internet I eventually found Katherine Timothy, after whom the syndrome had been named, and a support group on Facebook. This was great as it meant I could speak with other families, although, it was heart-breaking as there were so many bereaved families.

Finding out more about Timothy Syndrome

In October 2018 I flew to America with Calvin to attend the SADS Foundation (Sudden Arrhythmia Death Syndrome) conference. There were six families with Timothy Syndrome at the conference and having met them already via Facebook, they instantly felt like family. I learnt that there were many common symptoms with our children besides those of the heart (Long QT), including: hypoglycaemia (episodes of low blood sugar), brain developmental delay, weakened immune system, gastrointestinal issues, dental problems, unusual body temperatures and more.

In March 2019 we were invited to go to Cardiff to take part in the IMAGINE ID Study, a research project studying the long term behaviour and mental health of children and young adults with intellectual disability, where there is a genetic cause. We met Professor Jeremy Hall and his team at the Neuroscience and Mental Health Research Institute. This was all very exciting as their interest in the CACNA1C gene was as great as ours – bloods were taken to create a Calvin brain.

Setting up as a charity

I still had more questions than answers and it was becoming clear to me that if awareness of this ultra-rare disease did not increase, we were unlikely to be the subject of any research that would give us the answers.

TSA was registered as a Charitable Incorporated Organisation at the end of September 2019 and in October I began the Building Rare Communities Project with Genetic Alliance UK.

In December 2019, TSA and the Neuroscience and Mental Health Research Institute hosted our first Timothy syndrome family day. The day was a huge success and featured talks from international researchers and clinicians working with Timothy Syndrome and CACNA1C variants, including Katherine Timothy herself. It offered families from across the world an opportunity to come together and share their experiences. Eight Timothy Syndrome families from England, Scotland, Wales and Dubai met for the first time ever. We experienced tears, joy, friendship, learning and hope. The next proposed date for a Family weekend is in 2021.

Achievements and next steps

Knowing we had to raise awareness we made a film. Since we finished it in January it has been busy – we won ‘Best Aspiring Filmmaker – Voluntary Group Collaboration’ at the Rare Film Festival, received official selection for Disorder: The Rare Disease Film Festival, which, due to Covid-19, was postponed and has meant we are now part of The Disorder Channel on Amazon Fire and Roku. We are also finalists in the ‘Healthcare charities & patient associations’ category at the PM Society Digital Awards later this month. The next steps are to get the website updated and running so it can not only inform but support families and the medical community. Our Natural History study is about to start and also we are creating a Timothy Syndrome patient registry to accelerate research.

I know so much more than I did but I still don’t know the answers.

I know that there are around 43 living cases of Timothy syndrome in the world, our oldest living is 28 years old (the average life expectancy is two and a half years old) and that there is a spectrum of affectedness within the CACNA1C gene genetic changes creating TS1, TS2 and Atypical TS. We have found a few more families whilst I have been on this journey, one found us via the awareness film which is amazing, but I fear we are missing many children and that some will have died as awareness is low for diagnosis and this gene is so under-researched. Understanding the subtle changes between the differing mutations will give a greater understanding of the function of the CACNA1C gene at large; for that we need our registry up and running.

WE’D LIKE TO HEAR FROM YOU. GET IN TOUCH TO SHARE YOUR EXPERIENCES OF HAVING A GENETIC CONDITION OR SUPPORTING SOMEONE WHO DOES: [email protected].